Architects of the Universe: How black holes influence the evolution of galaxies 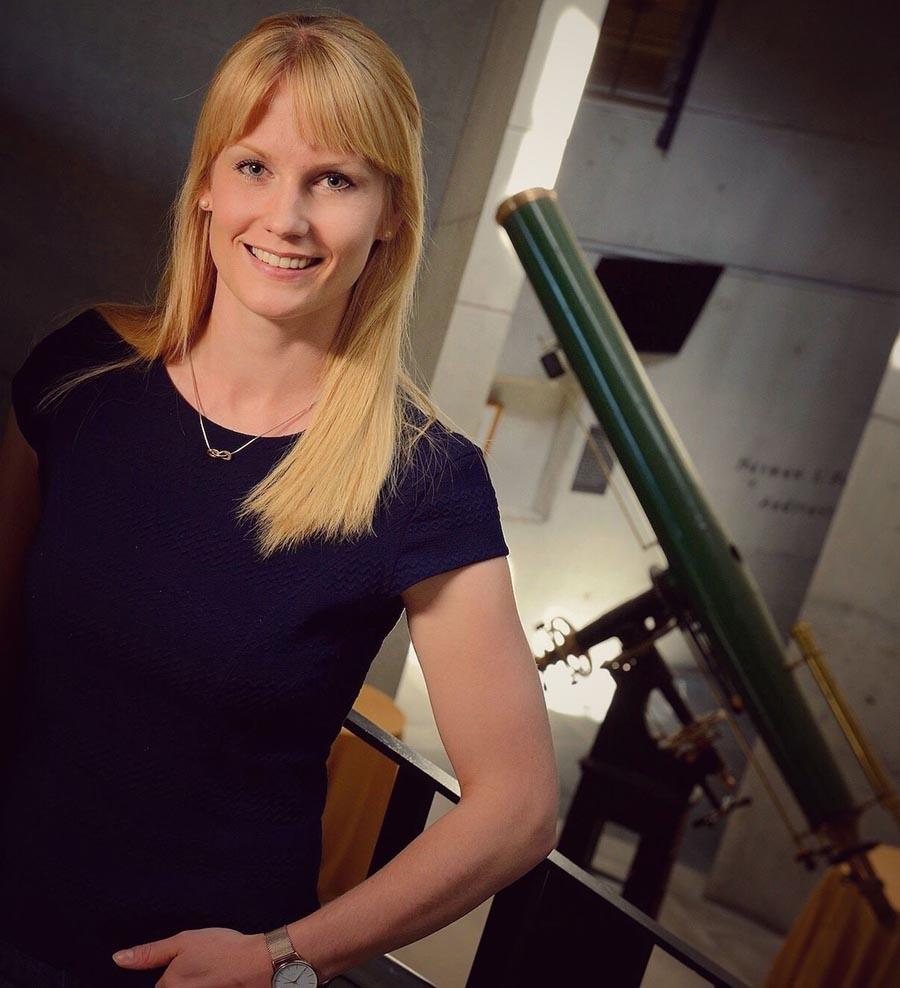 “The events of the past two weeks have heralded a new era in extragalactic astrophysics.” Dr. Dominika Wylezalek began her presentation by enthusiastically showing one of the recently published infrared images from the James Webb Space Telescope: “What we see here is the deepest, clearest image of the early universe ever made!” She pointed out thousands of galaxies of different shapes and at various distances. However, the scientist said, the picture would look very different without the black holes in our universe, since they play a key role in the evolution of galaxies.

Galaxies are accumulations of stars, gas, and dust held together by gravity. Our planet Earth is part of a spiral galaxy – the Milky Way – comprising about 300 billion stars and with a diameter of some 100,000 light-years. At its center is a so-called supermassive black hole. “Black holes are compact objects whose gravitational force is so strong that not even light, which travels at a speed of 300,000 kilometers per second, can escape,” Wylezalek explained.

How do we know about the existence of black holes? More than a century ago, the astronomer and physicist Karl Schwarzschild (1873-1916) solved the field equations of general relativity for the first time – thereby establishing the theoretical basis for black holes. It was not until 1973 that the observation of stars that follow an elliptical orbit provided concrete evidence for the existence of a black hole in the center of our galaxy. Using Kepler’s laws, it was possible to calculate its mass, amounting to around 4.3 million times that of the sun.

“By measuring the motion of stars and gas, we now know that almost all massive galaxies in our universe have black holes at their center,” Wylezalek said. It has now also been established that black holes evolved together with their galaxies. Matter falls into a black hole during its active phase of growth, releasing a great deal of energy in the form of radiation, she continued. Due to these processes, black holes can bring the formation of new stars to a standstill, especially in massive galaxies. Without its central black hole, considerably more star mass would be found in our Milky Way galaxy as well.

Although the name “black hole” suggests otherwise, the most active of them paradoxically number among the brightest objects in the universe: quasars. According to the physicist, they are around 100 trillion times as bright as the sun and therefore by far outshine their own galaxy. The worldwide scientific community, including Wylezalek’s working group in Heidelberg, is fascinated by the latest data from the James Webb Space Telescope. Citing real-life data, the speaker concluded by providing some intriguing insights into her current research activities.

“With the data from the James Webb Telescope, we want to better understand the interrelationship between black holes and galaxies,” Wylezalek summarized. In the universe, she said, there are different types of black holes, which influence the evolution of galaxies in their own individual ways – just like architects. The latest space images for the first time allow us to look back about nine to ten billion years into the past. At that time, the universe was very active compared to its current state – moving times from an astronomical perspective! But here too, as is so often the case in science, “there are still many questions remaining to be answered.”

Speaker
Dr. Dominika Wylezalek studied physics at the universities of Heidelberg and Cambridge; she received her doctorate from LMU Munich. After undertaking research at Johns Hopkins University, USA, and the European Southern Observatory (ESO) in Munich, she has been leading a DFG Emmy Noether Research Group at the Center for Astronomy of Heidelberg University since 2020.