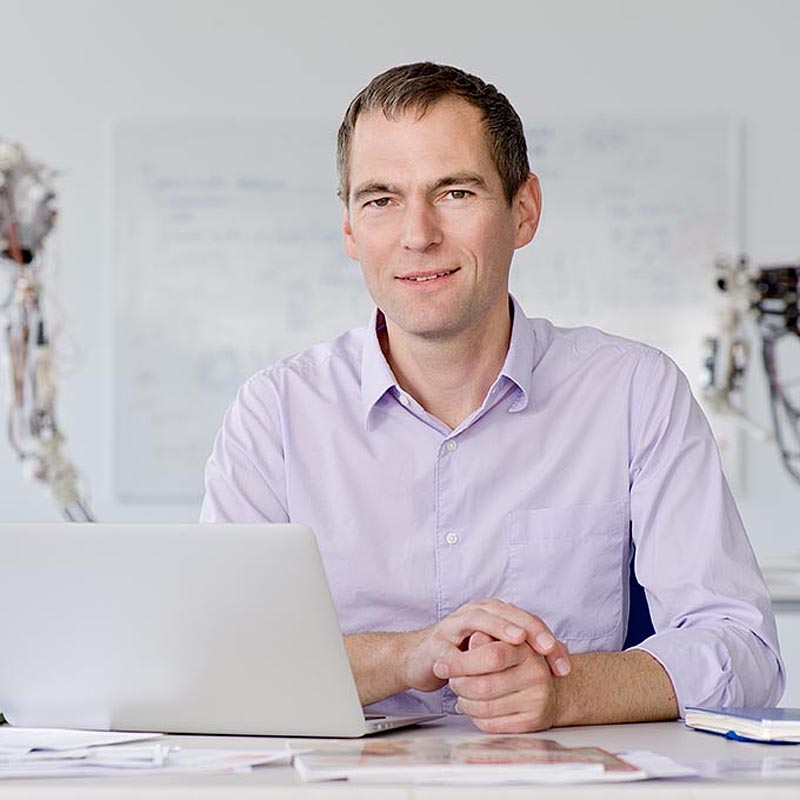 It was enough just to program the basic rules: The program AlphaGo kept playing chess or Go against itself until it was able to convincingly beat all human and electronic opponents. After twelve hours, the self-learning program was already invincible in these two board games. “But AI – artificial intelligence – taking control of the world is not something you need to worry about for the foreseeable future,” PD Dr. Florian Röhrbein pointed out. “Let’s just modify the task a little: Instead of playing chess, the program is now asked to identify animals in pictures. It fails miserably and remains hopelessly inferior to our brains, for which pattern recognition is a key competence.”

Besides holding a doctorate in computer science, Röhrbein also studied psychology and philosophy. He analyzes both the technical implications and the ethical impact of the AI revolution on our society. According to Röhrbein, it is a fallacy to simply reduce the concept of intelligence to the brain. “A brain alone is not intelligent – it’s always about both behavior and effectiveness, about the body and interaction with the environment.” Today’s programs rapidly reach their limits here: They can analyze enormous amounts of data in a short time, but it is often impossible for them to control even simple motor processes or to recognize structures. Biological systems comprising nerves and synapses are designed to compensate even for injury and partial damage. “With a conventional computer, on the other hand, the whole system can be rendered irreparable if just one wire is cut.”

The novel research approach of modeling computers on living organisms is therefore promising, Röhrbein continued. “We analyze the interaction and organization of nerve cells in snails, frogs or mice, for example, and try to transfer the insights gained to the algorithms of a computer network.” The establishment of the European Union’s “Human Brain Project”, in which more than 100 research institutions are involved and which is being funded with around 1.2 billion euros over a period of ten years, represented a major leap forward. “We have now reached a point where we can generate a computer simulation of neuronal networks on the scale of a mouse’s brain. This is a huge advance: It means we are only about a factor of 1,000 away from the human brain, so even that scale is now within our reach.”

In the future, neurorobots modeled on nature would be vastly different from their silicon cousins today. They will no longer focus on blindly combing through endless reams of data, but will be able to analyze situations, learn from them and interact with their surroundings with a high degree of motor autonomy. If something like “machine consciousness” were to emerge, some computer scientists believe, it would likely be in such biomorphic and bio-inspired robots.

In the discussion that followed, some attendees expressed concern about the rapid development of current computer technology, whether in military applications or because of the threat of ousting many people from their established jobs. “It is indeed difficult to make predictions here,” Röhrbein countered. “But at least as far as the labor market is concerned, I don’t want to paint too bleak a picture: I have a justified hope that many new jobs will be created here too. But apart from that, I think we’re somewhat afraid of the wrong technologies. Take for example the AI in the smart devices that we constantly carry around with us in our pockets: It knows where we are, who we’re talking to, what we’re buying and what we’re interested in. We should keep a critical eye on all that."

Speaker
Dr. Florian Röhrbein earned his doctorate in computer science at the Technical University of Munich, with psychology and philosophy as minor subjects. He undertook research sojourns at the University of Liverpool in England and at Yeshiva University in the USA, where he worked as a postdoc at the Neural Computation Lab. He has received numerous grants and awards for his scientific work. Since 2011, he has been a private lecturer at the Chair of Artificial Intelligence and Real-time Systems at the Technical University of Munich, and he is editor of the journal “Frontiers in Neurorobotics”.